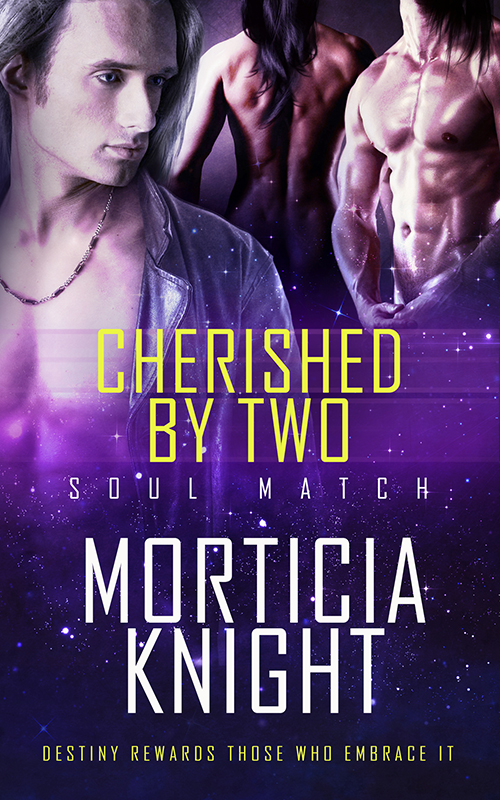 Destiny rewards those who embrace it.

Chris and his alien soul matches, Lasar and Nary, are ready to deepen their new bond as mates. It’s also time for Chris to begin his training as a Nasha, or sub, and for Nary to embrace his new role as Ahna, or Dom, to Chris. As three in the soul match they are unique. Not only have Alasharians never matched with a human, they’ve never matched as three.

What makes them special also puts them in danger. The Supreme Soul Healer warned Chris that many changes were ahead, ones even more startling than the original invasion. They must keep their bond a secret until they know who they can trust.

Lasar and Nary are invited to a pleasure party by the Alasharian’s leader, the Nall, and are forced to bring Chris and his cousin, Morgan. But a terrifying turn of events sets in motion what might be the beginning of the end for them all, unless they can resist the void.

Lasar tugged Chris into his arms right as Nary had reached out to him. They held each other, took a moment to bring them back as three again. Lasar raised his head to look down at Chris.

“I know you want to do well, boy. I don’t doubt that for a moment. We’re all learning together.” Lasar pinched Chris’ ass which pushed a yelp out of him. “But I still want our bath drawn.”

Chris grinned, Lasar’s words apparently comforting him. Lasar tensed right as his mates did. They exchanged worried glances as Lasar rushed to grab a robe from the closet. Someone’s coming.

He’d barely had the opportunity to throw the garment over his head before heavy knocks sounded on the door. An unnamable dread swam in his gut.

“Nasha.” He kept his voice low. “Take him into the balancing room and keep the door closed.”

“Now.” Lasar gritted it out.

Nary dipped his chin once, the pain in both his and Chris’ expressions heartbreaking. Once he’d verified that Nary and Chris were shut in the back, he strode to the door. When he swung it open he tempered his features at the sight of the Nall’s most trusted guard.

“Rahna Lasar.” He gave a short bow. “I hope I find you well this evening.”

Lasar hoped it wouldn’t be necessary to invite him inside. The only reason he could think of where it might be necessary would be if the Nall himself were on the way. Dearest heavens, no.

“Supreme Commander Yano wanted to make certain that this was personally delivered to you.”

The guard held out a golden envelope to him. It was the type of stationary that the Nall only used on special occasions. With everything that had been happening since the invasion, it could be anything. Lasar took the item from the guard. He paused, waiting for him to give his farewell. Instead, he stood his ground as if waiting for Lasar to make the next move.

“Was there anything else?”

The guard held his gaze. “The Nall requested that I receive verification from you regarding the contents of the envelope.”

Is this some sort of test? A trick?

“I see. Give me a moment to read his message and then I’ll give you my response.”

Lasar angled his body slightly, uncertain whether or not the guard knew what the letter contained or if Lasar would be able to hide his reaction to it. He slipped a finger under the royal seal keeping the envelope closed, breaking apart the sap of the rya tree that held the impression of a sharlon bird, its large wings spread as if in flight.

Once he’d lifted the flap, he slid the shimmering mauve card from the confines of the stationary. He swallowed hard as he read the words. After taking a deep breath and schooling his expression, he lifted his eyes to respond to the guard.

“Please convey to the Nall that my Nasha and I would be delighted to attend the pleasure party tomorrow evening.” He inhaled deeply. “And that both sex slaves under my care will be ready to perform.”