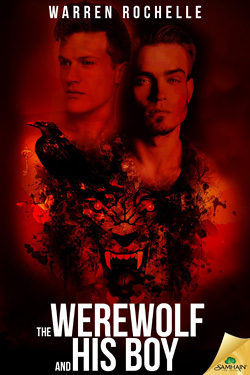 QSFer Warren Rochelle has a new MM paranormal book out:

Henry Thorn has secrets. He can smell emotions and hide inside shadows. Without that talent he wouldn’t have survived years of foster care and being different. Now it keeps him off his boss’s radar at Larkin’s the Richmond home improvement store where Henry has worked since leaving the foster care system. Everything changes when red-haired Jamey Currey shows up at Larkin’s as a new hire and Henry’s heart turns over.

Jamey’s different, too. He remembers flying once and he can see things others can’t.

The first time they kiss, lightning splits the sky and torrential rains fall. And the second time. Henry dreams of running and running and wolves have been sighted on Richmond streets. Jamey’s ultraconservative religious mother just wants him to come home and be saved again. Can their love survive?

It turns out that Henry is a werewolf, and Jamey, a descendant of the old gods, and the Watchers, diabolic monsters, are hunting them. These monsters will do anything to keep magic suppressed and hidden, even extermination.

With the help of friendly witches the boys go on a quest to find an ancient key that could stop the Watchers and bring back magic. They also embark on a quest to try and understand the mysteries of their own hearts.

Tonight he’d found a shaded corner in the back, where he was deadheading flowers and watering flats of petunias, dahlias, pansies, calendula, and sweet alyssum. Snapdragons, chrysanthemums, asters. The autumn roses were next. Henry inhaled, drinking in all the scents, the green, the earth, the shadows. He had never told anyone that shadows had colors and scents and that green shadows had the richest, the deepest, smell. The Garden Center was his favorite place; he wanted to work there full time. Instead he was a floater. Sort of.

Henry never told anyone a good many things. He’d learned early on that he was different from everyone around him in a deep basic way. People didn’t like differences. They would hurt you if they thought you were different. No one would ever know he had another secret besides smelling shadow-scents: he could disappear.

Somehow he knew how to pull the shadows around him like a soft, soft cloak. The colors of his skin, his clothes, his black hair, became ghosts of themselves, faint enough for whatever was around him to show through. Even the sounds he made in the shadows were muted to barely audible whispers. He’d learned long ago how to pretend to be invisible in a crowd. He tried not to use the shadows at work, but a lot of the time Carlene seemed to forget he was in the Garden Center, and that was fine with him.

Even if he didn’t love working with plants so much, Henry had to be in the Garden Center right now. That was another of Henry’s deep and dark and long-kept secrets—he sensed when things were coming, weighted moments charged with meaning. He rarely knew what the moments would be, and some he might have avoided if he had, like the time the dog at his last group foster home attacked him. He knew that they were coming and where. One was coming to the Garden Center.

Henry shook his head to clear his thoughts. It did him no good to waste time trying to focus on these impending moments. He went back to deadheading and spraying the plants. Plants, Henry had found, were often a lot nicer than people. Thorns and leaves might tear or prick his skin, but they never bit him or snapped at him, like cats and dogs did, or even some people. Plants never looked past him or through him or talked around him, the way the guys at work did, even at lunch, when they would go over to Jason’s Deli or Chipotle or out front to Dominic’s Garden Grill. He was used to it. It had been happening to him all his life, including in the foster homes he had been in and out of until he was eighteen. It still hurt.

Henry was scanning the next flat of pansies—a little dry, a few deadheads—when he jerked up, the watering can spilling on the concrete floor. The impending moment’s weight pressed against Henry. He listened hard, his head cocked toward the doorway, forty- or fifty-odd feet away.

“Three weeks of training and orientation, I told you that, right—this is the Garden Center, obviously… Back this way is the storage room, where we keep the special-order bins, appliances on clearance…” Carlene, the senior day manager, was giving a new guy a tour. Her voice trailed off as she disappeared back into the main store. The new guy, red hair falling over his face, stood in the doorway and stared at Henry. Henry felt his gaze as if it were directly on his skin. His body responded, and he knew the redhead was feeling the same things he was.

The redhead took a step back and turned, looked at Henry again, and followed Carlene.

Warren Rochelle has taught English at the University of Mary Washington since 2000. Rochelle’s short fiction and poetry have appeared in various journals, including the North Carolina Literary Review, Forbidden Lines, Aboriginal Science Fiction, Colonnades, Graffiti, Collective Fallout, Queer Fish 2, Jaelle Her Book, and Icarus, as well as the Asheville Poetry Review, GW Magazine, Crucible, The Charlotte Poetry Review, Quantum Fairy Tales, and Romance and Beyond. His short story, “The Golden Boy,” (published in The Silver Gryphon) was a Finalist for the 2004 Gaylactic Spectrum Award for Best Short Story. Most recently, his short story, “Finroc macFinniel Silmairë,” was published in the inaugural Summer 2015 issue of Empty Oaks.
Rochelle is the author of three novels: The Wild Boy (2001), Harvest of Changelings (2007), and The Called (2010), all published by Golden Gryphon Press. He also published a critical work on Le Guin and academic articles in various journals and essay collections.
He is at work on a collection of gay-themed retellings of traditional fairy tales and has just started the sequel to The Werewolf and His Boy.
For more information, please see his website: http://warrenrochelle.com. He can be contacted at [email protected].