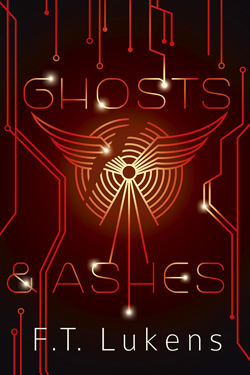 Three months have passed since the events of The Star Host, and Ren is living aboard the Star Stream under the watchful eyes of the Phoenix Corps. Plagued by vivid nightmares that ravage the ship in his sleep, he struggles to prove he isn’t a threat and fears he has traded one captor for another. His relationship with Asher, whose efforts to balance his personal loyalty to Ren with his professional duties to the Corps are failing, fractures.

Adrift without an anchor, Ren must return to his home planet of Erden if he has any chance of reversing his dangerous descent into madness. There, he hopes search for his missing brother and salvage his relationship with Asher. What he finds is knowledge that puts everyone’s allegiance to the test.

Hi FT, thank you for agreeing to this interview. Tell us a little about yourself, your background, and your current book.

Hi! Thanks for having me. My current book, Ghosts & Ashes, is the second book in the Broken Moon series. This book continues the adventures of Ren and Asher and the rest of the Star Stream crew.

QSF: Give us an interesting fun fact or a few about your book or series:

FTL: I love fun facts! Here are a few:

Originally, I planned to write a duology which became a trilogy. I couldn’t wrap up Ren and Asher’s story in just two books. So it went from being a single book to three.

The first book was written with the hope of potential sequels but with the knowledge there probably wouldn’t be. I wrote The Star Host in a way that it would be a standalone book if needed. But I left a few threads hanging just in case I was able to make it a series. Ghosts & Ashes addresses those threads and leaves a few of its own for the third book to pick up.

Ren and Asher were the only two characters named when I started writing. And Ren was a placeholder name that I just never changed. Jakob and Sorcha didn’t originally exist in the planning stages. Rowan was referred to as ‘Asher’s sister’ until her first appearance.

QSF: How did you come up with the title of your book or series?

FTL: Titles are difficult. Ghosts & Ashes had a few different titles before settling on this one. One of the first titles was too close to another book’s title that was coming out at the same time.
The series title comes from the broken moon that orbits Erden. It harkens back to Ren’s origin story. No matter how far he’s come, his beginning started on a planet where he used to stare at the sky and the damaged moon that hung there.

QSF: Give us an insight into your main character. What does he/she do that is so special?

FTL: Ren’s courage is what sets him apart and makes him special. Yes, he’s a technopath and has special powers, but it’s his perseverance in all the situations in which he finds himself an unwitting player that makes him special.

QSF: What do you think makes a good story?

FTL: For me – it’s all about the characters. I have to be emotionally invested in a character to be invested in their story. That means I can either love them or hate them to be interested in what happens to them. It’s something I take care of in my own writing – to create characters that are well rounded and that the audience would either root for or against.

QSF: What does your family think of your writing?

FTL: My family is very supportive. My husband makes sure that I get time to write when I need it. By that I mean, that instead of doing housework, I write. He takes care of more than his fair share of kid care and housework to allow me the time I need.
My brother is my biggest fan. He bought way too many copies of the book so he could hand them out to his friends.

“There you are!” Asher said, striding toward him, wrapping him in an embrace. “Stars, you’re freezing.” Asher rubbed Ren’s arms; his palms swept over the chilled skin. “Where have you been? You left and never came back. Jakob and I have been looking all over for you.”

Ren pitched forward, planted his face in Asher’s chest, and shook. The terror at being taken again mixed with the crushing truths from his parents overwhelmed him.

Ren stilled. Pressed close to Asher’s body, it would be easy to give into the urge to tell him everything, to spill the truth about what his parents had said about the Corps and the star hosts and the history his life was mired in. But his mother’s words lingered in the back of his mind, and Ren remembered how Asher had sided with VanMeerten so many times since the debacle on the drift. Asher was Phoenix Corps, through and through. His allegiance was split, torn between Ren and his duty as a soldier. And how much did he know? Was Asher aware that the first mission of the Corps was to hunt down the scattered remnants of the star hosts? Or did he only know what he had been told, like the rest of them?

Ren poured his power outward. The force field created a partial wall between the captives and the Corps. The comms shrieked. The pulse guns spat electricity, came alive in the hands of those who wielded them, and sparked and sputtered, shocking the Corpsmen with forks and tangles of electricity. They fell, writhing on the ground, even Zag. Ren vibrated with their screams, tasted the burn of skin and hair, but it wasn’t enough.

They had destroyed his home. They had made it so Ren could never return to what he was before. They had scared Ezzy, who was only a girl with a crush, who wanted to prove herself capable in a warzone when she should’ve been learning at school, playing in the woods, swimming in the lake, or blushing around boys. They had threatened them, frightened them, and they would burn, as Ren did, blaze in misery and despair, and thrash in pain until their veins blackened and peeled like wires, until their bones glowed like circuits.

The power flowed from him in a torrent, and he pushed it, and pushed it. He ensured those responsible were filled until they burst, until their souls were scorched out of them, until their humanity had crumbled to dust as his had.

Ren sighed. Asher wanted to talk, and Ren’s insides ached with a fierce loneliness he hadn’t experienced since the first night in the cell of the Baron’s citadel. He didn’t want Asher’s words or his pity. And he didn’t want to relive the details of the nightmare, which had sent him twisting in his sheets and crawling across the floor. The sense memories clung to him, like cobwebs whose phantom threads, fluttery and strange and stubborn, brushed against his skin. The strands were infinite; they touched the deep places of Ren’s consciousness and burrowed down to his marrow to pull out the things that terrified him most.

He didn’t want to share the nightmare, but Asher’s flat countenance and sure gaze couldn’t hide his worry. It flashed in his eyes and ran in shaky tremors down the length of his crossed arms, as if he hugged himself to keep in his concerns and not as a defense to reflect whatever Ren had to throw at him.

Ren bent his knees, propped his arm up, and allowed his fingertips to dangle. Sweat flattened his hair against his temples. He regarded Asher coolly as Asher sat on the edge of Ren’s bunk.

“Do you remember when we went dancing?”

Asher blinked at the non-sequitur. “On Mykonos?”

Rowan had taken them dancing in a place with loud music and rotating lights. The beat had vibrated through Ren’s boots. “I had never been dancing like that before.”

Asher raised an eyebrow. “You weren’t bad. Well, not as bad as Jakob.”

“I liked the slow dance.” Asher had grabbed Ren in his arms and pulled him to the dance floor. They’d laughed and moved and all Ren’s worries had dissolved in happiness and the rhythm of the music. “I liked being with you. With the crew. I miss that.”

“No. I’m not, but I didn’t feel like broadcasting it.”

“It’s a little late for that,” Asher said softly. Ren’s stomach twisted. Asher had all but confirmed his latest nightmare had played on the vid screens. The crew had seen what Ren couldn’t remember, didn’t want to remember. “You’re getting worse. And they know it.”

Ren rested his head on his knees. “You told her. You threw me to the wolves.”

“Why? Do you want me to leave? Be locked away?”

“I don’t know what you want, to be honest. I don’t understand why you hold allegiance to them at all.”

“Because I have to. I promised five years.”

“You and your promises,” Ren said bitterly. That was loyalty Ren couldn’t understand, not after what the Corps had done to Asher, not after having left him for a year to rot in a cell on what they called a backwater planet. But Ren was beginning to realize there were things he would never understand and maybe wasn’t meant to.

“And I promised I’d keep you safe. Any way I could. This is the only way. Don’t you understand that?”

Ren felt the slight touch of Asher’s fingertips across the back of his hand. His star sparked and sought out the mechanism in Asher’s shoulder instinctually.

“There’s a fine line between safety and captivity.”

F.T. Lukens is an author of Young Adult fiction who got her start by placing second out of ten thousand entries in a fan community writing contest. A sci- enthusiast, F.T. loves Star Trek and Firefly and is a longtime member of her college’s science-fiction club. She holds degrees in Psychology and English Literature and has a love of cheesy television shows, superhero movies, and writing. F.T. lives in North Carolina with her husband, three kids, and three cats.

Her first novel in the Broken Moon series, The Star Host, was published by Duet Books in 2016.